Across the speed and lead competitions, the spread of nationalities represented both on the start list (160 athletes from over 20 nations) and on the podium was impressive. Equally impeccable was the organisation of the UIAA Ice Climbing World Championships by Saas-Fee in collaboration with the Swiss Alpine Club, host federation. The finals, in particular, Saturday’s lead competition witnessed the presence of an enthusiastic crowd galvanising climbers from the many vantage points in the Saas-Fee ice dome. The UIAA Ice Climbing World Tour is partnered by Outdoor Research. 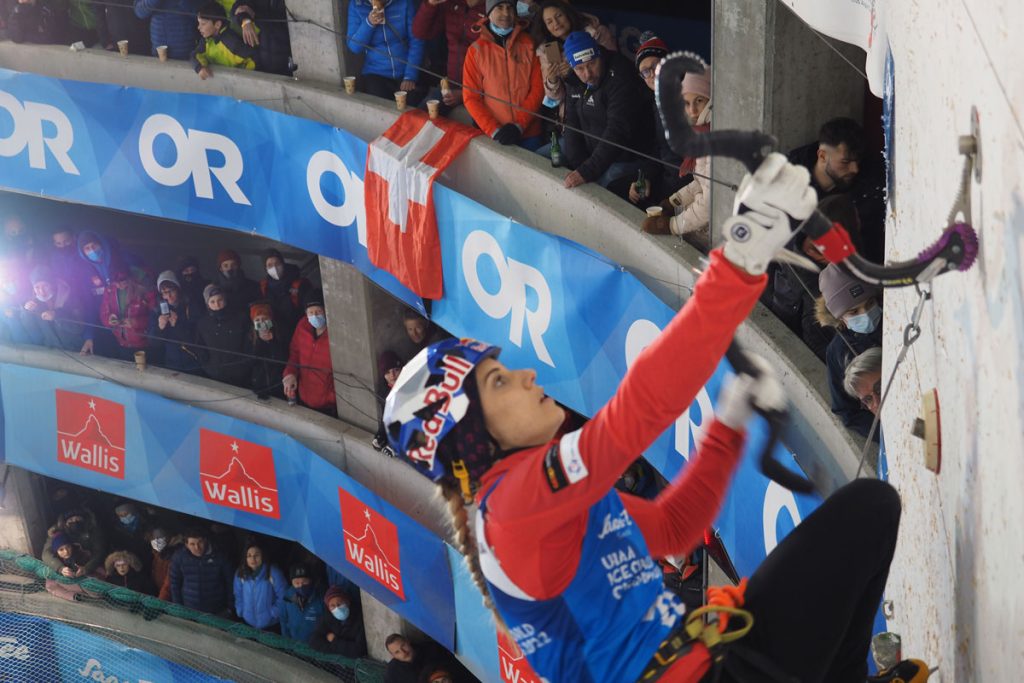 Louna Ladevant (main photo) is the new World Champion in men’s lead. Saas-Fee is proving to be a special venue for the 21-year old Frenchman. It was here in 2020 that he claimed the World Tour title. Topping the complex and gruelling lead route in Saas-Fee is always challenging. The official results bear testament to this with no male athlete achieving this feat across the two-day competition. What Ladevant provided was a measured demonstration of consistency as the top performer in qualification, the semi-finals and then the high-pressure finale.

Ahead of the final climb, Ladveant had a familiar foe to conquer, his older brother Tristan who had climbed to second place. The most tantalising target was 19-year old Benjamin Bosshard of Switzerland who had taken the lead, climbing to within a two holds of the top. It went down to the wire. Ladevant found himself with just seconds to surpass Bosshard’s achievement of surpassing the 17th quickdraw. This he did with an unnerving calmness and with just seconds to spare. First and third place for the Ladevant brothers. 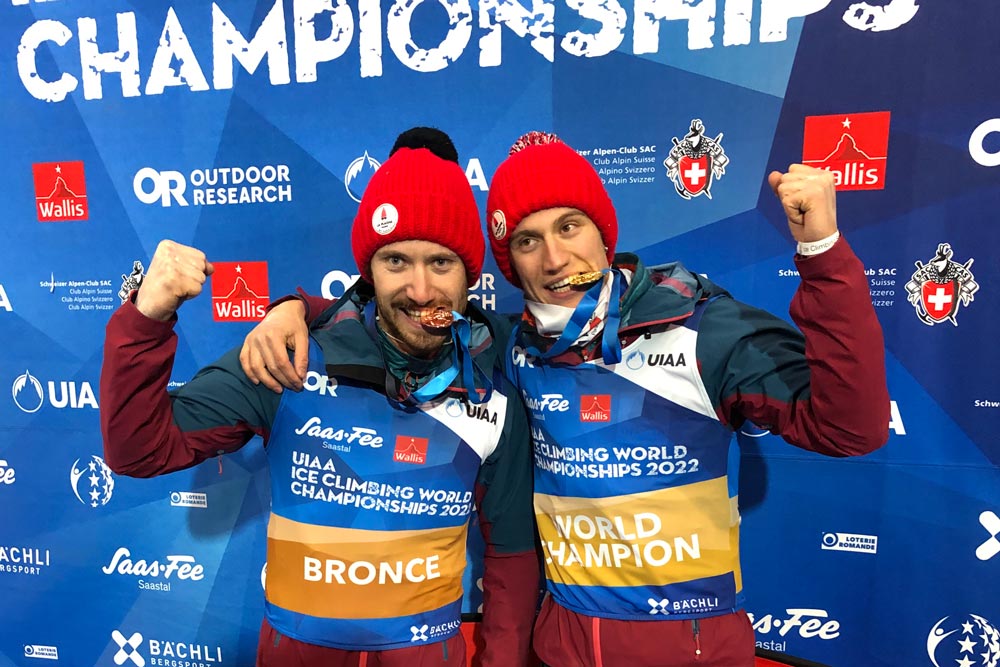 However the plaudits belong to Ladevant who at a tender age is currently the reigning UIAA Ice Climbing World Tour champion and outright World Champion.

Klingler last won a UIAA World Tour event in 2015 (a World Cup in Kirov) having dedicated much of recent years to her Olympic Sport Climbing campaign. A versatile and talented athlete, the 29-year old was one of the first female athletes to climb in the final. She topped the route giving an impressive demonstration of power and endurance. A huge act for her rivals to follow.

As in the men’s competition, a diverse range of nationalities were represented. Klingler’s Swiss teammates Franziska Schönbächler, Vivien Labarile and Laura von Allmen claimed third, fourth and fifth. Anastasiia Astakhova, the athlete who climbed shortly before Klingler, eventually claimed silver. Enni Bertling, best performer in the semi-final, Japan’s Haruko Takeuchi and Marianne van der Steen of the Netherlands all made the last prestigious last eight. The capricious nature of the route in Saas-Fee, significantly enhanced by the organisers for this event, and the demands on athletes, was evident in the high quality of the athletes to not make the final including Ekaterina Vlasova, Maria Tolokonina, Olga Kosek and Eimir McSwiggan. 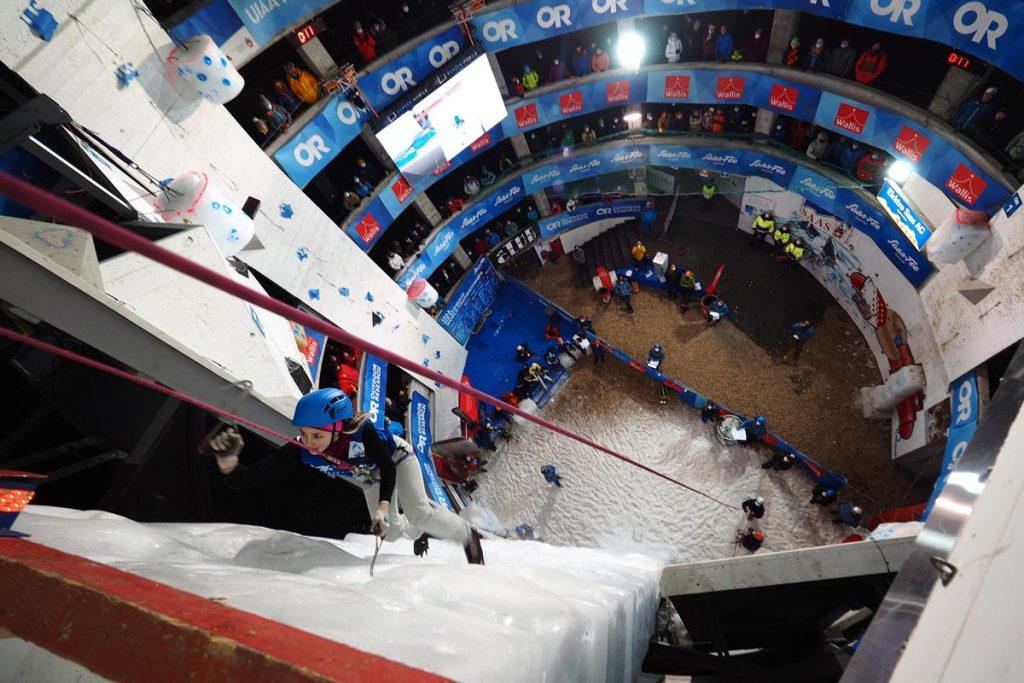 Men’s Speed: Mohsen Beheshti Rad wins gold for Iran
Ever since Mohammadreza Safdarian claimed the country’s first UIAA Ice Climbing gold medal in 2018, Team Iran has been on the ascendancy regularly providing podium finishers. The speed event in Saas-Fee is single format, athlete against the clock. In a quickfire competition, the goal is simple – post the fastest time. Each athlete has three attempts on the 16m wall.

With the likes of Maxim Vlasov, Nikita Glazyrin, Anton Nemov as well as the aforementioned Safdarian in the hunt, the competition welcomed some of the world’s fastest speed climbers. In the first round, Glazyrin’s attempt of 7.24 set an impressive benchmark. That was until Mohsen Beheshti Rad of Iran found his range. On his second climb he set a blistering time of 7.17. It transpired that the only athlete capable of beating that time was Rad himself who in his final climb hammered home a 6.90 second climb. Absolutely flawless. 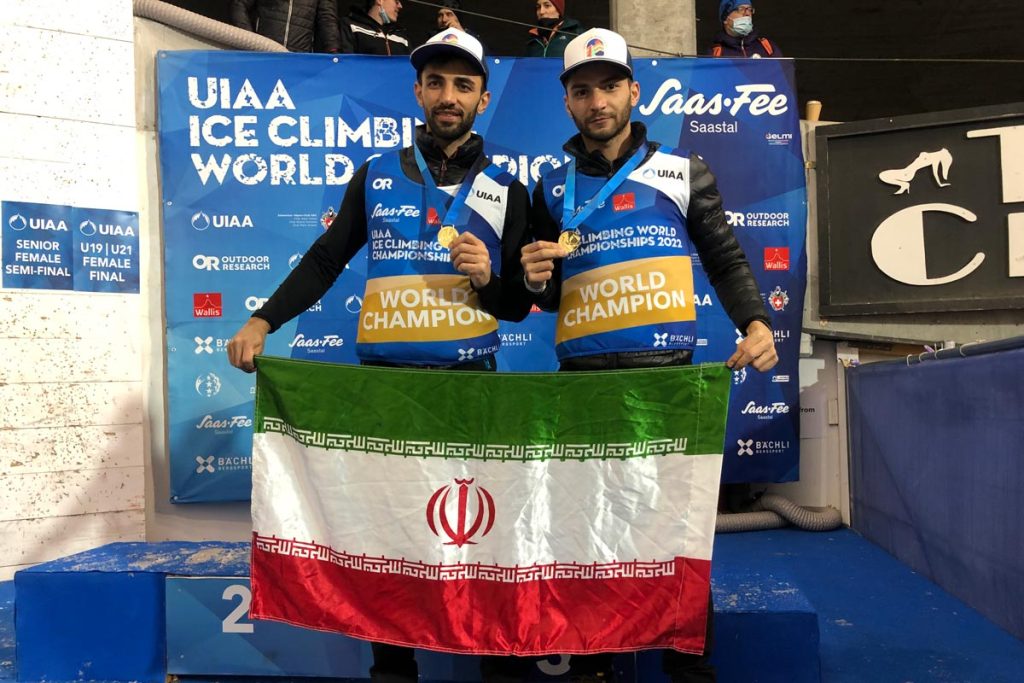 Women’s Speed: Savitskaia takes the plaudits
In any UIAA Ice Climbing women’s speed competition, if you can finish higher than the imperious Maria Tolokonina you are likely to place well. It was Iuliia Filateva, one of a number of athletes competing under the UIAA flag, who set the early marker with a time of 10.55 on her first climb. The time stuck for a while and eventually earned her a silver medal. Registering 11.17 on her first climb, Natalia Savitskaia, a six-time UIAA Ice Climbing World Cup winner, recorded 9.81 on her second climb. She was the only female to climb under ten seconds in the final. It wasn’t the fastest time of the day. Tolokonina’s attempt at 8.71 seconds proved the most rapid but came in qualification, in the final her best time of 11.30 seconds earned bronze.

All results from the UIAA Ice Climbing World Championships can be found here.

Combined Ranking
There was also a World Championships combined ranking for athletes who competed in both lead and speed. Mohammadreza Safdarian claimed the men’s title and Iuliia Filateva the women’s crown.

World Youth Championships
An enthralling UIAA Ice Climbing World Youth Champions in lead and speed (U16, U19, U21) ran in parallel with the senior competition. Results can be found here. Among the headlines were first UIAA Ice Climbing medals for the Spanish team. Highlights of the Youth finals are available on the UIAA YouTube channel. A more complete review of the Youth event will be posted on the UIAA Ice Climbing website shortly. The event presented a wonderful opportunity for youth climbers to test themselves on the same structures and under the same organisation as the senior athletes.

The UIAA thanks the organisers, led by Kurt Arnold and Dario Andenmatten, for the hosting of an excellent event. The team at Saas-Fee are the most experienced on the competition ice climbing circuit in terms of hosting top-level competition. This year’s event was the 22nd time they have staged a major international event. 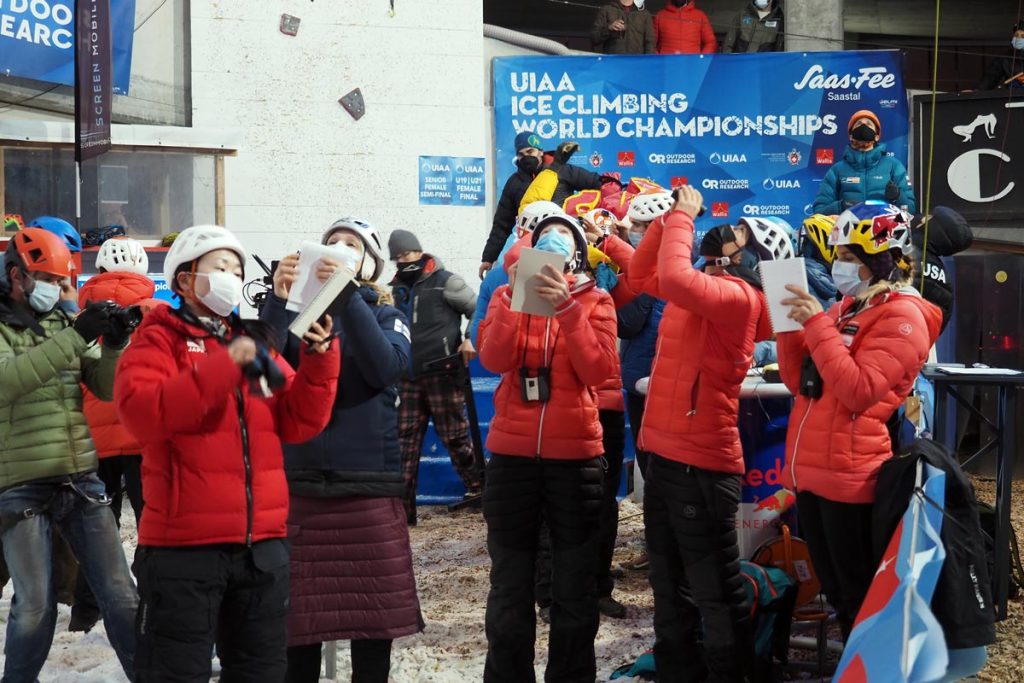 Streaming and highlights
Highlights of all finals can be found on the UIAA YouTube channel.

Photos
Photos from the event are available on Flickr.

Results Archive
A full archive of UIAA Ice Climbing results from 2002-2021 can be found here.

Coming Up
The next event to take place in the 2021-22 UIAA Ice Climbing season is the first event outside of Europe, the North American Championships in Ouray (4-6 February). Full details can be found here