Ice climbing combines the allure of the winter sport environment with fast-paced action, intelligence and determination. In the lead discipline, ice climbers require technique, tactical mastery and nerves of steel in executing complete moves in seemingly improbable positions. The speed discipline, a true vertical sprint, is about raw power, strength and aggression.

The International Climbing and Mountaineering Federation (UIAA) was founded in 1932 and has a global presence on six continents representing 90 member associations and federations in 67 countries.

The work of the UIAA is conducted through the work of its commissions which consist of members who volunteer their expertise in a particular field of mountaineering. The commissions are: Anti-Doping, Ice Climbing, Medical, Mountain Protection, Mountaineering, Safety and Youth. Their work includes managing Training Standards, the Safety Label, the Mountain Protection Award, Respect the Mountains, the global youth event series, the UIAA Ice Climbing World Tour and issues relating to access, mountain medicine and anti-doping.

The UIAA promotes the growth & protection of mountaineering and climbing worldwide by:

→ preserving their spirit and traditions

Discover more about the UIAA →

The UIAA has organised competition ice climbing for the past twenty years and in that time has witnessed the growth in popularity of the sport throughout the world.
Ice climbing is a dynamic sport, combining determination, technique, speed, precision and excitement. The sport is increasingly appealing to young people, evident by the number of international climbers who take part in the annual UIAA Ice Climbing World Youth Championships.

The UIAA is fully committed to the growth and sustainability of the sport by:

→ Supporting more national federations in creating a pathway for athletes to join the World Tour;

→ Working with the IOC and event organisers to create greener events, reducing carbon footprint and creating structures which can be used throughout the year and for competitions each and every year.

→ Increasing the use of ice on lead routes in order to conform to the Winter Olympic Charter and improve the sport’s Olympic Games eligibility. Returning to the icier structures of World Cups past, but retaining the technical difficulty developed in recent modern route setting;

→ Ensuring that the competition is truly global through the creation of more continental competitions allowing athletes to compete in local and regional events;

→ Increasing the broadcast of the sport, through livestreaming on social platforms as well as linear and digital environments;

→ Producing training guides for aspiring climbers, judges and routesetters to allow more individuals. This includes the publication of the The UIAA will soon update its including the UIAA PractICE Climbing Guide. Focusing on supporting young climbers through collaboration with the UIAA Youth Commission.

→ Supporting training camps across the globe to allow experienced ice climbers to train for the competitions they wish to enter, learning from the world’s best coaches and athletes.

→ Hosting events not only in popular winter sport resorts but in urban centres, to allow more people to witness and discover the sport first-hand;

→ Providing more information about training on natural ice and exploring ice climbing out of its competition context.

The International World Cup (IWC) was preceded by a European competition schedule which included events in Courchevel (France), Cortina (Italy), Pitztal (Austria) and Kirov (Russia). The first common rules to govern competitive ice climbing appeared in 1998 and the first International World Cup took place in 2000, organised by a private German company, which remained responsible for the event until 2002 when the International Ice climbing Commission of the UIAA took over. Since when the UIAA has organized an annual World Tour comprising World Cups, World Championships, World Youth Championships and continental competitions.

The real history of the sport, however, dates back to 1912 when the first known ice climbing competition was organised on the Brenva glacier in Courmayeur, Italy. 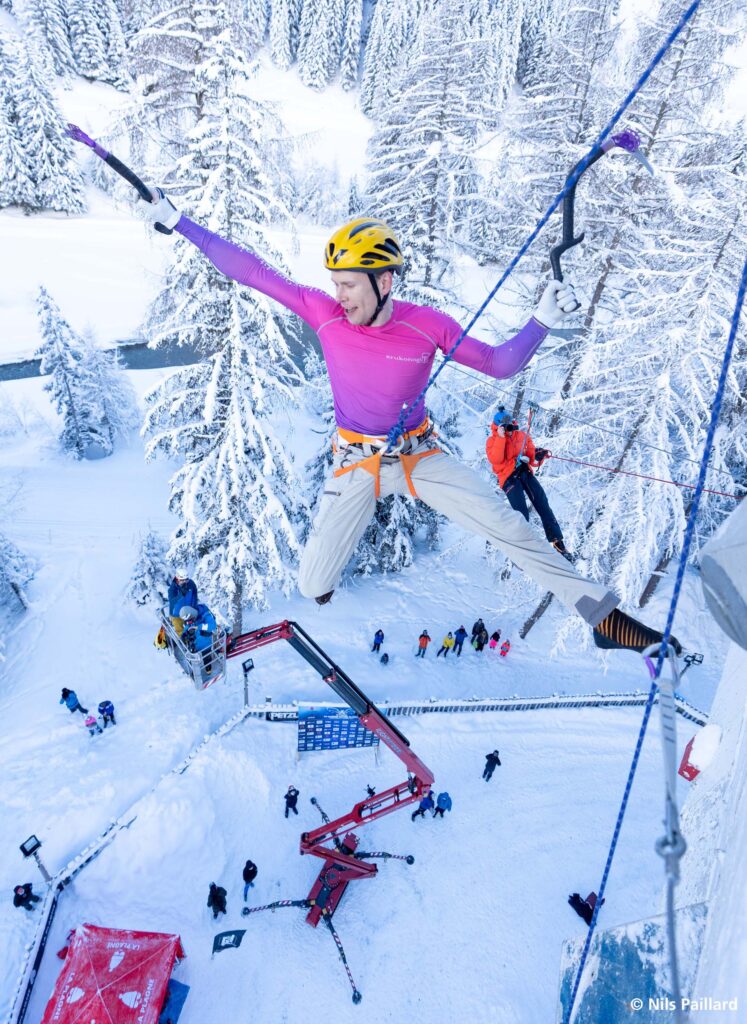 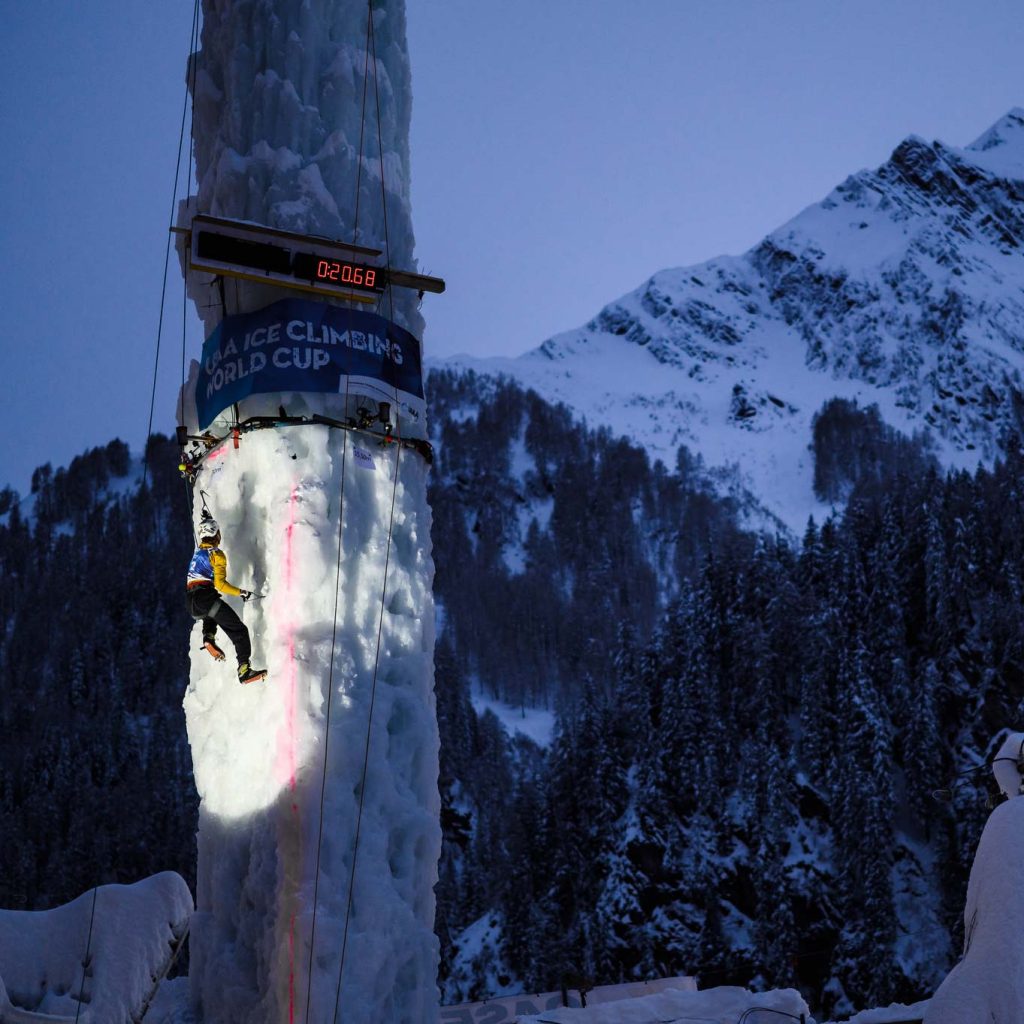 Lead-difficulty competitions organized by the UIAA generally take place on artificial ice climbing structures. The purpose for this is to standardize the competition routes among all athletes. Usually, there are three rounds in a competition: qualifications, semi-finals, and finals. In each round, the competitor who is belayed from below must climb in lead-format, a route where quickdraws are clipped sequentially. For security, one or two of the first quickdraws are pre-clipped by the route setters for each athlete. Each participant is allowed a single attempt to climb the route in all rounds except the qualification round. In qualification rounds, the athlete is allowed to start a second attempt if in the first attempt she couldn’t clip first quickdraw after the pre-clipped one(s). In addition, each climber has a predetermined time to climb the lead-difficulty route in every round. Time starts when an athlete leaves the starting position, and stops when an athlete falls or finishes her performance on a route. Athletes must terminate their attempt on the route when the allotted time is expired.

The result of each athlete is mainly based on the height achieved by the climber. Time is also considered by the referee when an athlete finishes an attempt before the route time is over.

While Italy and France were the first countries to organize lead difficulty competition in ice climbing, Russia (the former Soviet Union) was the motherland for speed competition. Probably the early pioneers of this sport were alpinists from Russia, negotiating fast ascents of various mountain routes. In the early 1960s in Russia, speed competition in rock climbing and alpinism were extremely popular among mountaineers and rock climbers. By the late 1980s speed ice climbing competitions were formalized and regularly organized in the country and come the late 1990s other speed ice climbing events started to emerge in North America and Europe.

Modern speed competitions are held on a vertical ice wall from 12 to 15m high. The format could be either on a single route or in duel. To maximize competitor and audience interest, the UIAA recommends the duel format. In these cases, two walls are constructed, one next to another. The format is simple, the fastest climber wins.

Compared to lead-difficulty competition, the speed competition is less well known. However, this sport is worth the recognition of the ice climbing community. In recent years, speed climbing has been shown to catch the spectator’s eye, and is more easily understood by the masses. Fast but serious, are good words to qualify this discipline. 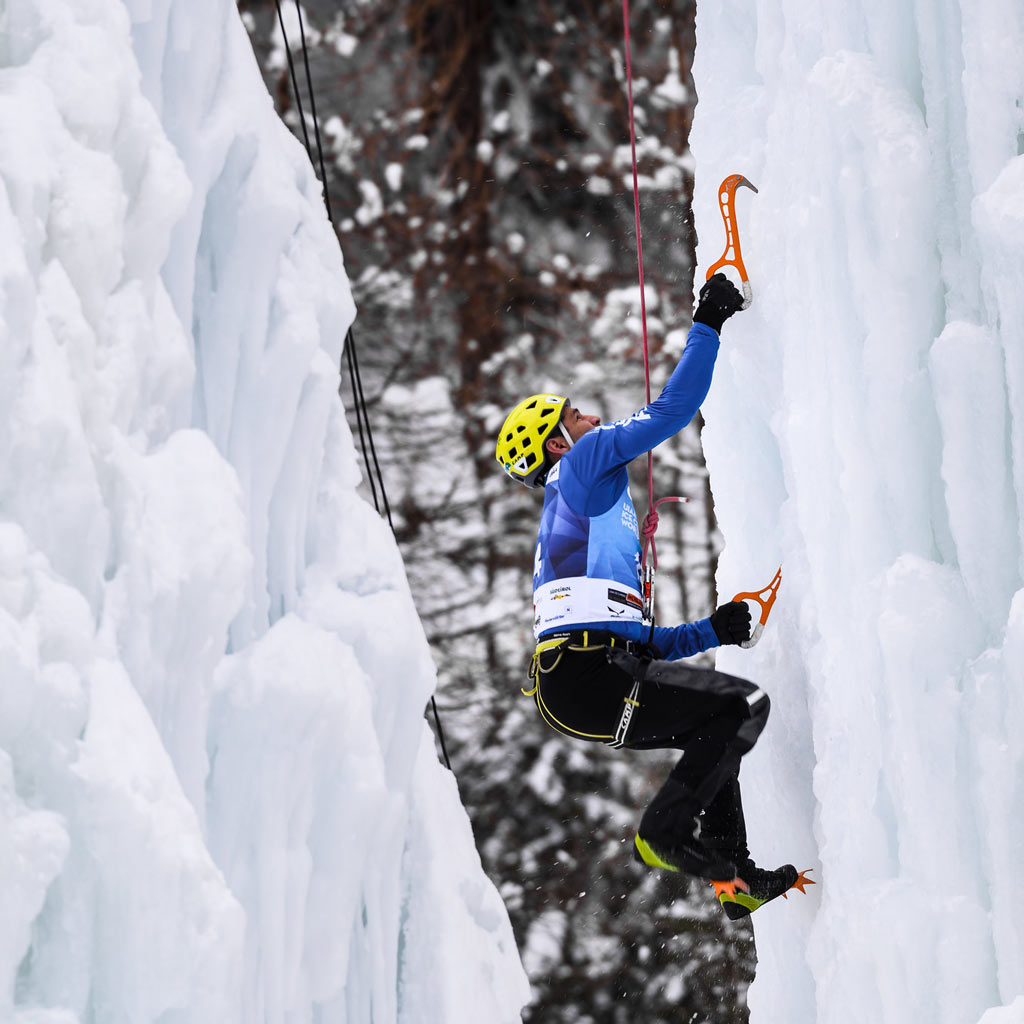 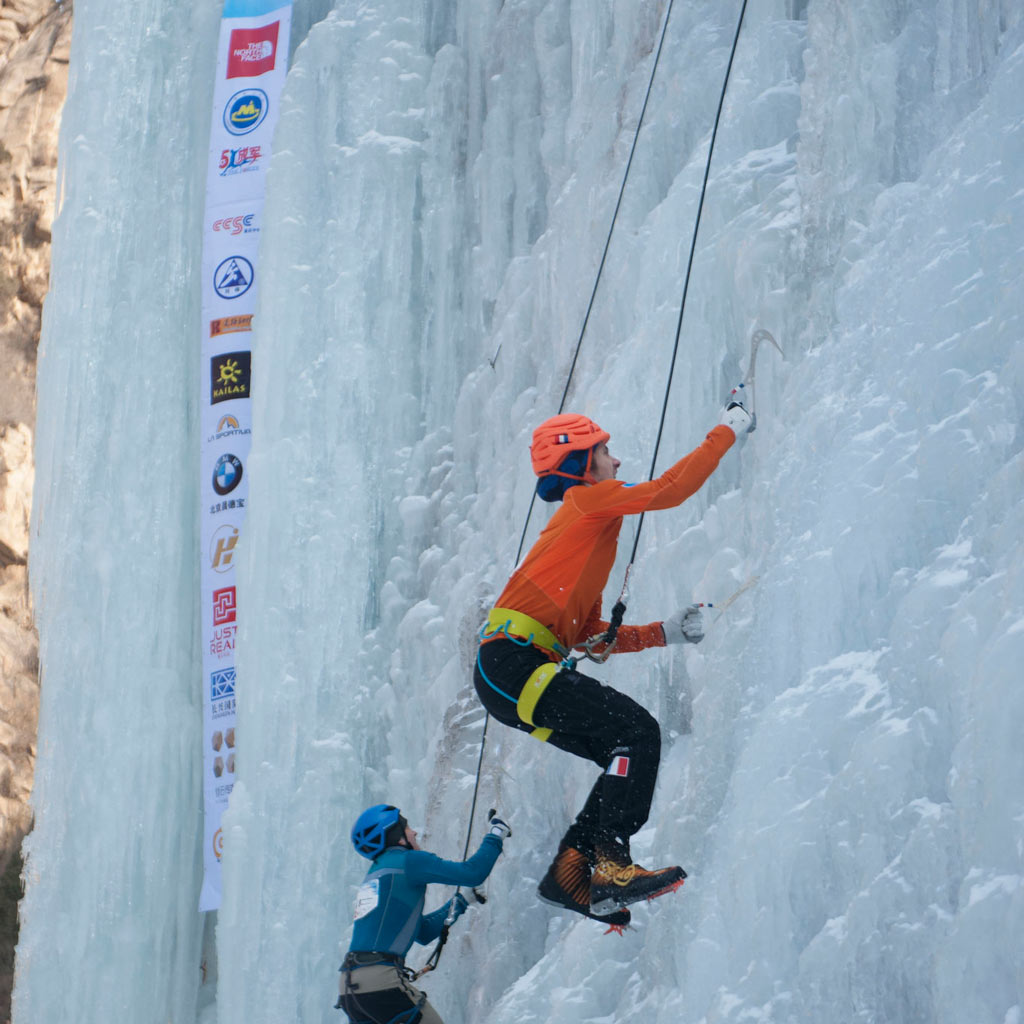